The British high court rules against George Lucas in his suit against the artist who helped design the iconic Stormtrooper costume. 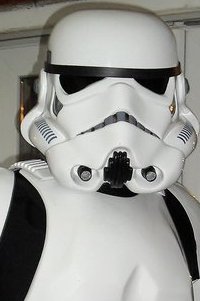 The British Supreme Court has just taken a lightsaber to George Lucas’ case vs. a British artist who helped design the iconic Star Wars Stormtrooper costume.

The Brit court ruled on Wednesday that Andrew Ainsworth, the artist in question, has the right to sell replicas of the costumes without permission from Lucas, according to the BBC. This comes after two lower British courts had already ruled on Ainsworth’s behalf.

Lucas, in Boba Fett mode, did not give up, enlisting fellow directors James Cameron, Peter Jackson and Steven Spielberg in the cause. The directors wrote letters to the British courts on his behalf.

“It was the Star Wars film that was the work of art that Mr. Lucas and his companies created,” said the justices. “The helmet was utilitarian, in the sense that it was an element in the process of production of the film.”

Lucasfilm had previously won a $20 million judgment against Ainsworth in a 2006 California lawsuit over the helmet sales. Since then, British courts had warned Lucasfilm that they couldn’t enforce the U.S. judgment in the U.K.

Ainsworth’s company, Shepperton Design Studios Ltd., casts copies of the Stormtrooper costume from original molds and sells them online. A Stormtrooper helmet costs about $375 and up and Stormtrooper armor goes for $1150, depending on currency rates.