Jesse James was granted full custody of his daughter, Sunny. Will her mom still get to see her? 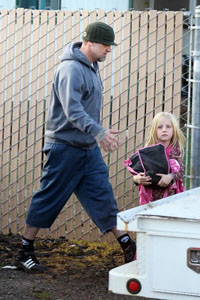 We never thought we’d see the day when Jesse James would be considered the more stable parent, but it happened! An Orange County, California judge granted the newly-single James with sole custody of his daughter Sunny, 7.

The decision gave the ex Mr. Sandra Bullock the win in his years-long battle with Sunny’s mother, Janine Lindemulder. Attorney John Schilling told People that Lindemulder will either have to go to inpatient rehab if she moves to Texas or will only get supervised visitation with Sunny if she stays in California.

“Jesse feels vindicated,” Schilling added. “This is what he’s been claiming all along, that Janine needs therapy.”

The West Coast Choppers founder moved to Austin after he fell in love with the city while married to Bullock.

“[Texas is] a better place to be,” James said of his choice to move. “We have a big gated house with lots of land. Sandy and I spent time there and never once had a problem.”

“Jesse treats me with great disregard as a mother, he doesn’t want me in the picture,” Lindemulder said in July 2010. “I believe I’m trying to be replaced by Sandra Bullock. I can’t compete with what they have.”

Since then, James has gotten engaged and broken up with LA Ink tattoo artist Kat Von D.

We can only hope that James will give his daughter a stable environment — and we hope Bullock still sees Sunny so she can impart some sort of sanity into the young girl’s life.

Do you think Jesse James deserves sole custody of his daughter?