Denise Richards is on the road promoting her new book, The Real Girl Next Door. What does she have to say about her notorious ex, Charlie Sheen? 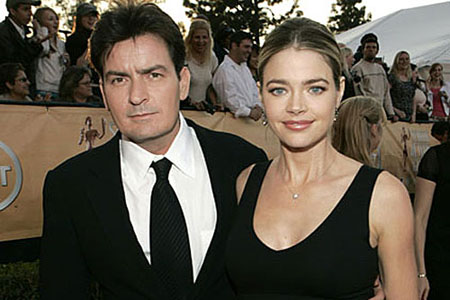 Richards told Us Weekly that she knew Sheen had prostitutes and adult film stars at the dinner, but she didn’t say anything.

“Charlie invited me to this dinner with ‘friends,’ and once I realized what these women did for a living, I thought, ‘It’s one meal; you can suck it up and get through it,'” Richards, 40, said. “It’s not my place to judge how they make a paycheck.”

She eventually went back to her hotel room — alone — to put the couple’s two daughters to bed.

“After I quieted [our daughters Sam, 7, and Lola, 6] down, I climbed into bed; I had to get up early for my press. About an hour later, I was awakened by sounds outside my door, including walkie-talkies, which is never a good sign,” she wrote in her new book, The Real Girl Next Door. “A few minutes later, the cops showed up. Several officers went into Charlie’s room, and a sergeant came into mine.”

Richards said the cops questioned her about her ex for several minutes.

“Your ex-husband is staying in the room across the hall while you’re in this room?” one officer asked Richards. “And you went to dinner with him and there were hookers there at the table?”

The actress and new adoptive mom told them everything she knew and then went to the hospital with Sheen.

“Charlie was put into an ambulance, and I rode with the sergeant to the hospital, though I insisted I had to be back at 4:30 a.m.,” she writes. “After making sure Charlie was stable and settled, the nice policeman gave me a ride back.”

Wow. That would be enough for us to completely cut off contact with Sheen. Unfortunately, that won’t happen with Richards.

“I’ll never cut off contact with Charlie,” she added. “He’s my girls’ dad. As they’re older they’ll deal with him how they can.”

We’re happy that Sam and Lola have such a level-headed mom. Again, we ask: Can she just adopt Sheen’s kids with Brooke Mueller, too?

Read on for more Denise Richards