What do you get when you put Friday Night Lights‘ Tim Riggins and True Blood‘s Eric Northman on a boat? Battleship! The first trailer for Peter Berg’s blockbuster has hit the net and it’s more Transformers than old school board game. 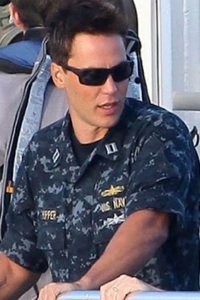 In Battleship, Taylor Kitsch, who plays an up-and-coming naval officer, encounters a foreign vessel during a sea expedition. Along with his brother (Alexander Skarsgard) and crewmembers, they are pulled into the fight of their lives when they discover a robotic, alien-like ship.

When Battleship first went into development no one knew what to expect because there’s only so much you can do without base characters or an origin story.

We knew Peter Berg would have to think outside the box to make Battleship work and it seems like he did.

The movie looks like Transformers meets Pirates of the Caribbean. Do you agree?

Battleship blasts into theaters May 18.