Lancôme and L’Oreal have come under fire after the Advertising Standards Agency said the pictures of Julia Roberts and Christy Turlington are misleading because all of their wrinkles are photoshopped. What can this mean for the future of ads? 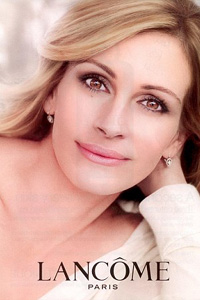 Ads by L’Oreal and one of their brands, Lancôme, have been banned in the UK after complaints that the ads were overly airbrushed and photoshopped, giving people unrealistic expectations for themselves.

One of the ads is of Julia Roberts, who was rumored to have been paid $50 million to be the face of the brand, for Lancôme’s Teint Miracle foundation. The picture of the 42-year-old celebrity shows her with smooth, flawless skin and was obviously photoshopped from what she really looks like — beautiful, but with some expected wrinkles for her age.

The ad says the Lancôme foundation “recreates the aura of perfect skin” and has seven patent applications, however, it looks like if women were expecting the same photoshopped results that Julia got, they would probably be disappointed.

L’Oreal tells The Daily Mail that they used “post production” techniques on Roberts, but that the ad was accurate in showing her “naturally healthy and glowing skin.”

The ASA ruled against L’Oreal and demanded the ads be pulled in the UK, saying: “On the basis of the evidence we had received we could not conclude that the ad image accurately illustrated what effect the product could achieve, and that the image had not been exaggerated by digital post production techniques.”

Another ad that came under fire was from Maybelline (also owned by L’Oreal) which showed Christy Turlington looking wrinkle free from the Eraser foundation. The company admitted they photoshopped the picture to “lighten the skin, clean up make-up, reduce dark shadows and shading around the eyes, smooth the lips and darken the eyebrows,” but the ASA also said the ad must be pulled in the UK for misrepresentation. 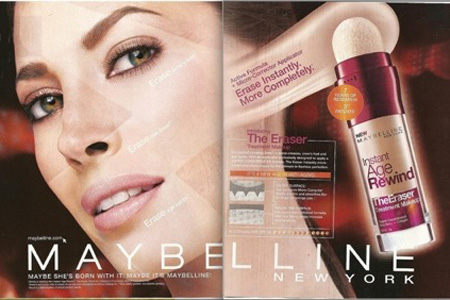 Jo Swinson, who registered the complaints against these ads, is happy about the decision.

“This ruling demonstrates that the advertising regulator is acknowledging the dishonest and misleading nature of excessive retouching,” she tells The Daily Mail. “Pictures of flawless skin and super-slim bodies are all around, but they don’t reflect reality. With one in four people feeling depressed about their body, it’s time to consider how these idealized images are distorting our idea of beauty.”