Heather Matarazzo is engaged! The Princess Diaries actress and longtime girlfriend Caroline Murphy are planning for their own happily ever after. 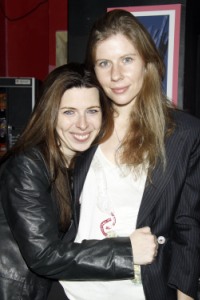 Heather Matarazzo and girlfriend Caroline Murphy are making the most of New York’s legalization of gay marriage. The pair is making plans to legally tie the knot!

Once known as the geeky girl from the film Welcome to the Dollhouse, Heather Matarazzo says, “I always wanted a wedding. Not a trip to City Hall.”

The actress, pictured here with Caroline Murphy in April of 2010, actually proposed three years ago. The couple’s original California wedding plans were dashed when Prop. 8 eliminated the rights of same-sex couples to marry.

For their New York nuptials, Heather Matarazzo plans to wear an off-white dress, while her bride will wear a white pants suit. Don’t cringe — Caroline clarifies the pants suit will be “a sexy one!”

“My eyes and spirit have opened up since I found someone that I get to share my life with,” Heather Matarazzo tells the Associated Press. Upon first meeting Caroline the actress called her mother and declared, “Mom, I just met my wife.”

After the wedding the couple has plans to quickly start a family. “We’ve always talked that Caroline would have a child first, and then I will go,” explains the 28-year-old, adding that they also have hopes to adopt.

Best wishes on the engagement and wedding plans to both Caroline Murphy and Heather Matarazzo!

2 mins ago
by Louisa Ballhaus