Gene Simmons has finally proposed to Shannon Tweed, but that doesn’t mean the couple will actually get married. 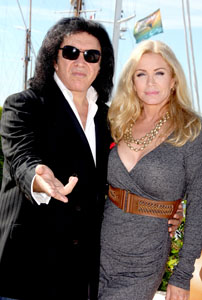 Gene Simmons and Shannon Tweed have shared their relationship troubles with us on the last season of Family Jewels, but we thought that was all behind them after Gene proposed to Shannon in Belize on the season finale.

Turns out that episode was taped months ago, and since then Tweed has sounded less-than-thrilled with the relationship in interviews, including storming off the Joy Behar Show because she was ticked about Simmons’ womanizing ways.

In fact, Tweed pretty much shot down any hope the couple is actually engaged when she wrote on Twitter Tuesday night, “And to everyone who thinks they know — I AM NOT wearing an engagement ring in the couch interviews. Just an every day ring. Sorry.”

“It is a diamond. Just not an engagement ring… We are taking it day by day. Stay tuned.”

Gene Simmons got into the Twitter game too, writing, “Shannon and I work on our relationship every day. One day at a time. Thanks for watching. When we figure out our lives, you will know.”

You probably want to hold off on buying them a wedding gift just yet.