Kristin Cavallari modeled wedding dresses and talked about her upcoming wedding for an issue of Life & Style just days before Jay Cutler ended their engagement. 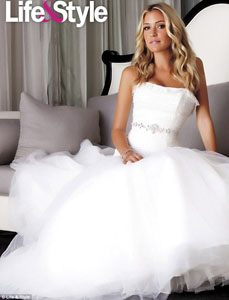 Life & Style planned an entire issue around Kristin Cavallari preparing for her wedding and even had the star of The Hills model wedding dresses for them.

“I want a romantic, mystical wedding, with lots of flowers,” she told the magazine during the shoot on July 21.

Sources say that the very next day Cavallari and Jay Cutler got into a huge argument because he wanted her to return to Chicago with him but she had work commitments.

“He told her that she needed to commit to him, and to move to Chicago,” the insider told the magazine.

Cutler ended the engagement and returned to Chicago alone on July 23.

Now these photos have hit the web right in the midst of their breakup. Awkward!

read on for more kristin cavallari