In news of tattoos you’ve got to see to believe, Kat Von D is showing off a portrait of Jesse James inked onto her left side. Watch the clip of Kat Von D’s tattoo surprise for Jesse James below! 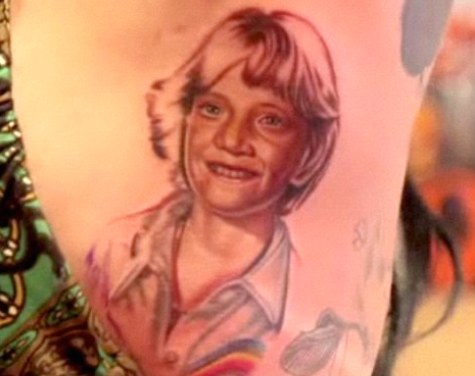 The portrait Kat Von D selected to have permanently inked is of a young Jesse James, taken from his fifth grade school photo. The LA Ink star decided to surprise her then fiance with the tattoo, telling cameras before the big reveal, “I’m getting his face tattooed on me and I have no idea how he’s going to react.”

The 29-year-old then goes on to say that she wasn’t sure about his reaction, telling him, “I thought you were going to tell me you are breaking up with me.”

A premonition? Word of the couple’s split broke on Monday with Kat writing on Twitter, “I am no longer w Jesse, and out of respect for him, his family and myself, thats all the info I’d like to share. Thanks for respecting that.”

Do you think Kat Von D should hold on to her tattoo of Jesse James’ face or give him the laser treatment?