Crystal Harris told Howard Stern she only had sex with Hugh Hefner once — and his performance was less than stellar. 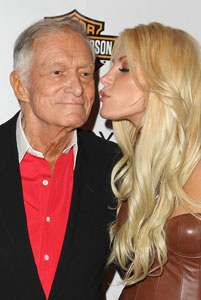 Crystal Harris continues to stab Hugh Hefner in the back, this time by disparaging the man who made her a celebrity by trash talking his skills in bed.

Harris told Howard Stern that she only had sex with her 85-year-old former fiancé once and it lasted “like two seconds.”

Hefner fired back on Twitter: “The sex with Crystal the first night was good enough so that I kept her over two more nights.”

“Crystal lied about our relationship on Howard Stern but I don’t know why.”

Those two tweets were deleted, but he later added, “When I said, ‘I missed a bullet’ when Crystal left, I didn’t mean I didn’t love her. I meant I realized she really didn’t love me.”

“I feel sorry for Crystal. She seems lost… Crystal convinced me that she adored me. That was the first lie.”

read on for more hugh hefner