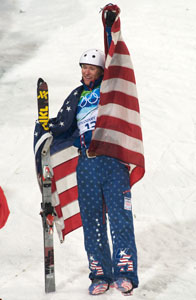 Peterson competed in the 2002, 2006 and 2010 Olympics, and took home a silver medal for freestyle skiing at the Vancouver games.

Peterson, who friends called Speedy, called 911 before pulling the trigger so authorities could find his body in the remote canyon in which he chose to end his life. He left a suicide note near his car.

“Today is a sad day in our sport,” said Bill Marolt, the chief executive officer of the United States Ski Team, in a statement. “Jeret ‘Speedy’ Peterson was a great champion who will be missed and remembered as a positive, innovative force on not only his sport of freestyle aerials, but on the entire U.S. Freestyle Ski Team family and everyone he touched.”

Peterson was a serious contender for a gold medal at the 2006 Olympics in Turin when he wobbled on a landing and instead finished seventh. Later that evening he got into a bar fight and was asked to leave the Olympic Village.

Read on for more celebrity deaths on SheKnows >>>

The skier stopped drinking and began to deal with trauma he had experienced, including the death of his sister at the hands of a drunk driver and witnessing his friend’s 2005 suicide. He admitted that his thoughts turned to suicide in the past because of childhood sexual abuse.

Peterson gave an emotional speech after he won the silver medal, saying, “I know that a lot of people go through a lot of things in their life, and I just want them to realize they can overcome anything.”

“There’s light at the end of the tunnel and mine was silver and I love it.”

Unfortunately his sobriety didn’t last. He was arrested last week in Idaho for DUI.

“The hundreds of kids who came to City Hall to shake Speedy’s hand after he medaled in Vancouver last year are a living testament to his power to inspire and motivate,” said Boise Mayor David H. Bieter. “It is truly tragic that, in the end, there was one hill he wasn’t able to conquer. My thoughts and prayers go out to his family and friends.”

“I know Speedy’s friends and family were incredibly proud of his effort in Vancouver, and his achievements were an inspiration to people all over the world.”