Another day, another legal issue for Lindsay Lohan. Although recently free from house arrest due to her shoplifting battle, our girl just can’t seem to escape the courtroom drama.

If only Judge Judy could preside over Lindsay Lohan‘s latest legal battle. Stephen Clark is suing Lohan in small claims court over her failure to pay for an entertainment system he sold and installed in her California pad. He reportedly is owed $1,180 for work completed in June — which doesn’t seem like much for the mega-famous, although out-of-work, actress. The job was done while Lindsay was under house arrest — money probably well spent. 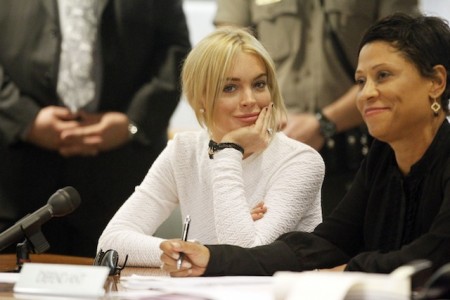 So what gives? It’s doesn’t seem like the bill would be too much for Lohan to pay promptly. She seemed to have no problem wearing $1200 Louboutins to court last week — a court appearance in which she claimed she can’t afford to seek the mental health treatment ordered by the judge as part of her probation violation sentence.

Maybe Lohan was too preoccupied with how to mend her rift with Paris Hilton to make sure her bills are paid on time. Or maybe her unemployment and legal battles really are catching up with her and she no longer has the bank account for the lifestyle of a Hollywood starlet.

This latest filing is just one of many pending for Lohan. She’s also facing charges for assault and battery while in rehab at the Betty Ford Center with the plaintiff seeking a whopping $1 million in damages. Even if the lawsuit is dropped, it still costs her plenty to defend herself. She might even have to settle the case. Whatever the end result, Lohan seems to be drawn to the judicial system more than the big screen.