The judges kept saying this week’s America’s Got Talent was chock full of high caliber acts, but we were only impressed by a few.

Read on to see who caught our eye in the third round of 12. Oh, and read till the end if you want to see a lunatic jump from crazy heights into a shallow pool of water. 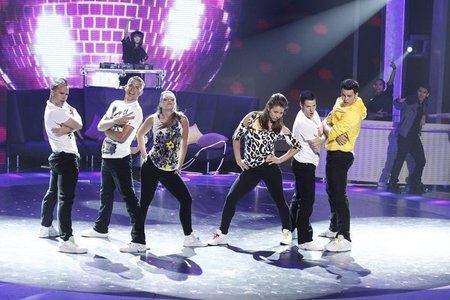 In the past two weeks, we’ve seen a lot of tremendous acts on America’s Got Talent, but this week was just mediocre in our book.

Despite our boredom with this week’s America’s Got Talent roster, we did manage to find four acts we thought were worth mentioning — the first being the Summerwind Skippers. These guys make skipping “look sexy” as judge Piers Morgan said. The group basically took a disco ball, hot dancers, killer music and jump ropes and turned the stage into a dance club. Check it out for yourself.

The second group to catch our interest was Poplyfe. This singing group is just crazy-cool. Piers Morgan advised that they get rid of the band and just stick with its lead singer, who by the way has the coolest hair, but they didn’t and managed to kill Adele’s Rolling in the Deep.

We tend to nod off when it comes to opera but Lys Agnes was entertaining. She’s got flair and style, especially her hair. She performed her operatic set amidst an edgy background, which made it cool and current. We’re on the fence as to whether it’s a million dollar act, but it was definitely worthy of a spot on our highlight list.

Professor Splash is — how do we put this? — out of his mind! He jumps from scary heights into a not-so safe pool of water. He needs to do something with a bit more variety next time, but he gets our “you’re out of your mind” award. We’re not even going to waste time detailing it — just watch for yourself.

Who was your favorite America’s Got Talent act? We know many of you might wonder why we didn’t choose to highlight Landau Eugene. Well, he was no doubt a brilliant singer, but we just thought the other acts had a little more excitement in them.