Haley Reinhart is the latest season 10 American Idol cast-off to land a deal with Interscope Records. 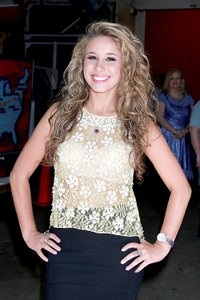 The 20-year-old who hails from Wheeling, Illinois added, “I am very thankful to 19 and Interscope for giving me this opportunity to create my own music.”

Pia Toscano’s already showcased her new single This Time on the American Idol summer tour and it officially dropped on July 12.

Many viewers were on the fence about Haley Reinhart’s growl during her time on the American Idol stage, but she seemed to win over fans long enough to stay till the end. She even took to the stage with her father for one of her last performances and managed to score huge hits on her AI performances posted on YouTube.

What kind of record do you think Haley Reinhart will make? Will you buy it or do you prefer the likes of Scotty McCreery, Lauren Alaina and Pia Toscano? Tell us, we want to know.