She is one of the most beautiful women in the world, but there is one thing Mila Kunis is not going to be showing any time soon, her bum. The star of Friends with Benefits hired a stunt booty for her nude scenes with Justin Timberlake, and the star was an integral part of casting her butt double during the initial phases of production. 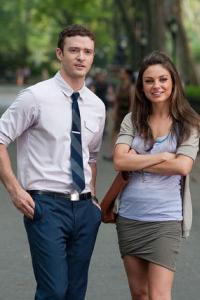 Gorgeous Kunis opted not to give everything away in her new movie, which leaves little to the imagination when it comes to the grand decision, to be clothed or not to be clothed.

While Justin Timberlake had no problem showing off his banging bod, Kunis decided that now wasn’t the right time to make that leap. So, she did what any self-respecting actress would do in her situation, she hired a stunt butt. Okay, a booty double. How about a bum for hire?

Either way, this was no fly-by-night job. Kunis, the movie’s director Will Gluck and her makeup artist held a casting call and hopeful bottom starlets mooned Mila and the others until the proper match was found.

Kunis explained the, um, process of elimination. “These young ladies came in and these lovely women had to show us their derrieres and we chose the one that resembled my body the most without looking like it’s fake.”

She revealed on Ryan Seacrest’s radio show that she is still not beyond showing some skin. She stated, “I showed side boob and I figured I can’t just give away anything all at once. I gotta let it all out in little pieces here and there.”

Mila’s co-star Justin Timberlake, on the other hand, was more than comfortable baring his booty, much to the delight of women everywhere. Joked Timberlake, “I tried to get into the editing room to cut down on my ass time.” He also revealed to Vanity Fair, “I only did it because I’m young now and everything’s where it’s supposed to be. I figured this is the time, before gravity gets the best of me.”