Rosario Dawson was on the cover of this month’s Shape magazine and talks candidly about society’s views on staying thin. 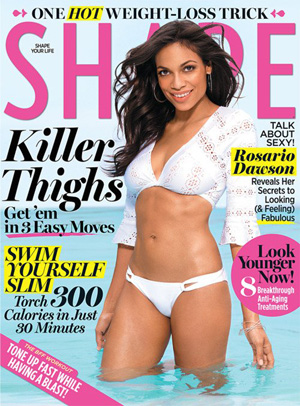 Rosario Dawson shows off her slim and toned bod in a white tummy-baring top and bikini bottoms, but tells the magazine that she gets told often on Twitter that she is “too skinny.”

But Dawson, 32, wants fans to know that not everything is as it appears. “It’s a form of violence, in the way that we look at women and how we expect them to look and be — for what sake? Not health, not survival, not enjoyment of life but just so you could look pretty,” the Zookeeper star tells Shape. “I’m constantly telling girls all the time, ‘Everything’s airbrushed, everything’s retouched. None of us look like that.'”

She said she had to lose a lot of weight in 2005 to play an HIV-positive drug addict in Rent — and was shocked when people told her how great she looked.

“I remember everyone asking when I was doing press for the movie, ‘What did you do to look so thin? You looked great,’ and I’m like, ‘I looked emaciated,'” she said.

In fact, Dawson reveals that self-deprivation is sometimes worse than the occasional splurge, and instead listens to her body.

“Whether it craves fresh vegetables or foie gras nothing makes me feel better than having something I really enjoy… The stress you put yourself through for having a treat is probably a thousand times worse for you than the sugar you just had,” she said.