Kristen Stewart isn’t the only one in her family in the Hollywood biz. Her mother, Jules Stewart, is directing a transgender prison drama that Kristen was supposed to star in… that is, until she dropped out.

Kristen Stewart’s mom, Jules Stewart, is gearing up to direct her first indie film called K-11, about a transsexual prisoner with autism. Kristen was actually going to play the lead role until the busy Twilight actress had to drop out due to sheduling conflicts. Her moms is still keeping the family involved, casting her brother Cameron (pictured below with Kristen in 2008) in small role in the film. 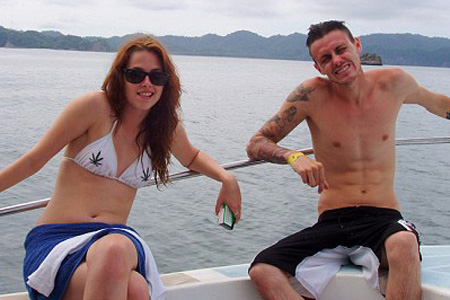 “It’s just one of those things where you try and get a movie off the ground that’s small,” Kristen Stewart told MTV about the film. “I don’t know [whether it will get made]. Like, right now it’s harder [to get indie films made]. It just never got legs. I still really hope to do it.”

Between the Twilight films and starring in Snow White and the Huntsman, Stewart apparently does not have time to make it.

In fact, Kristen is not the only Twilight star that recently backed out of the film. Nikki Reed dropped out of the film after telling MTV in November that she and Kristen have been involved with the movie since 2008. “It’s about a little-known section of the men’s county jail. I’m playing a man, and Kristen’s playing a boy,” Reed said.

Even though Kristen and Nikki are no longer involved in the film, it will be interesting to see Kristen’s older brother, Cameron, making his film debut, even if his role is a small part. The film will star Goran Visnjic (ER), D.B. Sweeney (Hard Ball), Kate del Castillo and Portia Doubleday (Youth in Revolt), with supporting actors Jason Mewes and Tommy “Tiny” Lister.