Denise Richards appeared on The View today and said she won’t participate in the roast of her ex-husband Charlie Sheen. 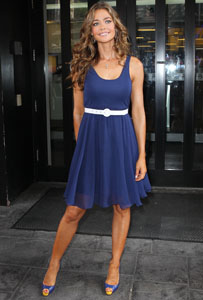 Charlie Sheen is being roasted in September for Comedy Central, but if you were hoping to see him get skewered by his ex-wife Denise Richards, think again.

Richards appeared on The View today and shut down any hints that she might participate in the roast. Although she says she hasn’t been “officially asked” to roast her ex, she said she wouldn’t do it because she knows her daughters would see it one day.

“A lot of people said that I was, but I haven’t been officially asked,” she said. “On one hand I think it’d be funny, but on the other I don’t know — with the girls. If I’m seen roasting their dad, they won’t understand.”

Denise said that when she married Sheen, “He’d been sober for three years… he was so wonderful, had an amazing heart, very charming, very grateful… I fell in love with him and those issues weren’t there.”

Those issues reared their ugly head early in their marriage, causing their very public, very contentious divorce — a situation that once played out in the tabloids, which Denise now says is very personal. She doesn’t even discuss the dirty details in her new book The Real Girl Next Door.

read on for more denise richards