Adam West, who played Batman in the ’60s TV series, makes a pitch to play the Dark Knight’s dad. 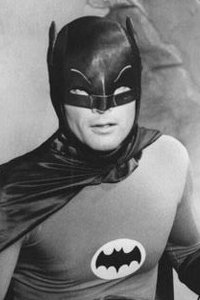 Specifically, he wants to be the Dark Knight’s father.

That one might be a little tough — even for a superhero. In the current Batman trilogy, directed by Christopher Nolan and starring Christian Bale as the Dark Knight, Batman’s parents were killed in 2005’s Batman Begins.

Still, a guy can hope. It’s all about the positive for West, who played the Caped Crusader on TV’s Batman from 1966 to ’68.

“My Batman, I think of it as the Bright Knight; the others are the Dark Knight,” said West, according to Reuters. West was joined on the Comic-Con panel by his Batman co-stars Burt Ward (Robin) and Julie Newmar (Catwoman). “It was such a harmless show, and it was so much fun — absurd. I (enjoyed) it so much more than any other series or movie I’ve done since.”

West, 82, said he was asked to play Batman after producers saw him in a TV spot.

“I was hired to play Batman because they saw a commercial I’d done for Nestle’s Quik,” West said, “and they said, ‘This is the turkey to play him.'”

West, whose representative was not available for comment as of press time, is also known for playing Mayor Adam West on Fox’s Family Guy. As for today’s Batman, The Dark Knight Rises is due out next summer.