Adrianne Curry is known for being both sexy and crass. This time, it was the sexy side that got her in trouble. Curry was forced to leave Comic-Con and change out of her butt-baring Aeon Flux costume into something more conservative. Was it that revealing? 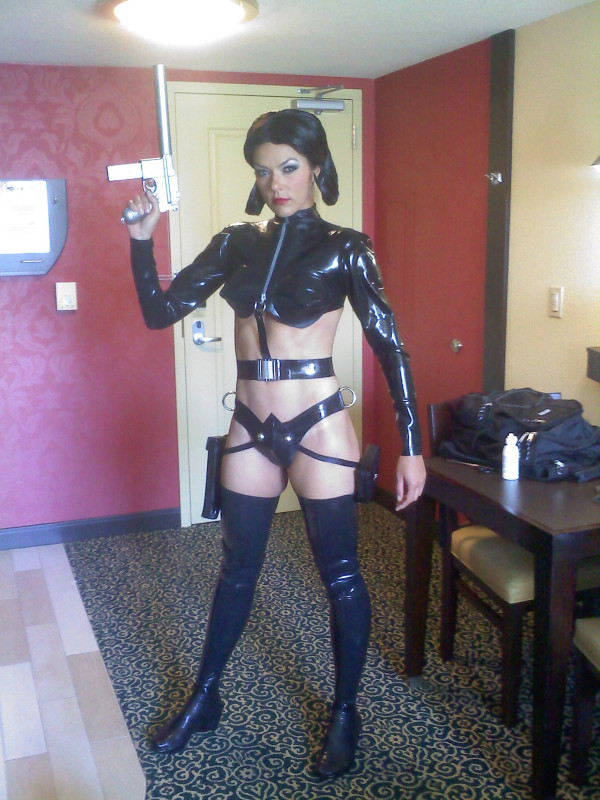 Adrianne Curry, the winner from season one of America’s Next Top Model, was apparently too hot for Comic-Con. Or at least her costume was. Curry tweeted a picture of herself in her sexy Aeon Flux costume (at right) and received lots of tweets asking for a shot of the back.

Well, San Diego police saw the back — or rather, the lack thereof — and deemed it too revealing for Comic-Con.

Curry was able to make her appearance, but was ushered away immediately afterward to change into a less revealing outfit. Curry tweeted, “Just got stopped by a ton of cops… my costume is illegal… the butt… sigh.”

Later, Curry retweeted a NSFW pic of a woman at Comic-Con who was wearing, well, pretty much nothing, with the question: “How did @AdrianneCurry get in trouble for her Aeon costume when THIS woman walked the floor?” Good question. Perhaps she was escorted out, too.

Curry first hit reality television on America’s Next Top Model. She became more well known after filming The Surreal Life, where she met Christopher Knight of The Brady Bunch fame, who later became her husband. Curry and Knight split at the end of May following six years of marriage as a result of “irreconcilable differences.”

So what do you think? Was Adrianne Curry’s butt-baring costume too sexy for Comic-Con? Or was it silly for the powers-that-be to make her change her Aeon Flux costume?