The son of Arnold Schwarzenegger & Maria Shriver has been released from the hospital following a gnarly surfing accident. 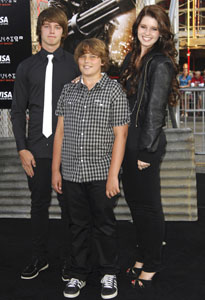 Christopher Schwarzenegger is home today a week after a surfing accident left him with a collapsed lung and broken ribs.

The 13-year-old son of Arnold Schwarzenegger and Maria Shriver spent days in the ICU surrounded by his family — but he’s now snug in his own bed after being released from the hospital last night.

Maria and Arnold each broke the news on their respective Twitters.

“Blessed to be able to take Christopher out of the hospital last night. What a feeling of relief to know that he’s going to be fine,” Maria wrote.

Arnold chimed in, “I knew Christopher couldn’t be stopped! Big thanks to all the doctors, nurses & staff at UCLA that helped him recover.”

Now Arnold and Maria can focus on getting that divorce finalized. Arnold refiled his divorce response after Maria found his original to be a total slap in the face.

read on for more arnold Schwarzenegger