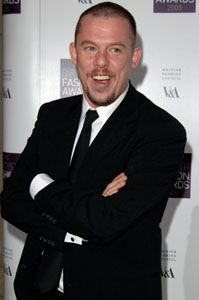 The fashion world was rocked to its core when Alexander McQueen committed suicide last year. Now we’re learning what happened to his fortune after his death.

Lee McQueen was worth an estimated 16 million pounds when he died — the equivalent of about $26 million. His lucky dogs received 50,000 pounds for their continual care, and the designer left another 100,000 pounds each to the Battersea Dogs and Cats Home and the Blue Cross Animal Welfare Charity.

“It is a touching tribute to his obvious love for his dogs and his legacy will allow us to help many thousands more sick and homeless animals across the UK,” said Kim Hamilton, chief executive of the Blue Cross charity.

The news that his dogs were left a hefty chunk of change is unsurprising since the designer’s short suicide note read, “Look after my dogs, sorry, I love you, Lee.”

McQueen also left bequests to his siblings, nieces, nephews, his godson and his two-person household staff, but the bulk of his millions went to his own Sarabande charity with the hope some would be used for scholarships at his alma mater, St. Martin’s College of Art and Design.

The house of Alexander McQueen is still going strong even after his death. New lead designer Sarah Burton designed Kate Middleton’s wedding dress — a natural fit since McQueen himself counted Prince Charles as a client while apprenticing on Seville Row.

39 mins ago
by Daisy Maldonado