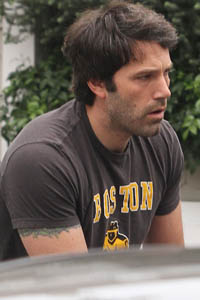 Ben Affleck has been sporting a startling new hairstyle around town, and not everyone is a fan. Usually, he keeps his hair cut short, but his latest ‘do is all about the shaggy. Need to borrow a flat iron, Ben?

The star had been seen rocking increasingly longer locks as of late, but it wasn’t until recently that folks saw the style the Hollywood actor was gunning for — and it looks like the fringe that Justin Bieber made famous. Maybe that means we’ll be seeing Ben walking around town flipping his hair out of his eyes like a teenager.

In fact, the funky hairstyle is for a role. He’s in the midst of shooting Argo, a political thriller that he’s starring in and directing. In the movie, Affleck plays a CIA agent, and the story takes place in the late ’70s, the time around which this particular hairdo originated.

Jennifer Garner hasn’t said yet whether or not she’s a fan of Affleck’s retro ‘do, or if she wishes he’d cut it.

Probably, she’s too busy fending off the latest round of is-she-pregnant rumors that have arisen since she was spotted walking around town with what looked like a bulging tummy. A big lunch or a bun in the oven? It’s too early to say.