Apparently, house arrest does a friendship good. Now that Lindsay Lohan is free to leave her home, she’s mended her riff with Paris Hilton. 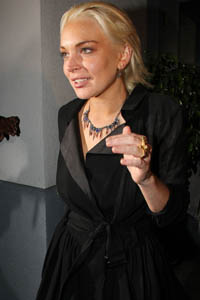 Lindsay Lohan is done with her house arrest sentence, and while the judge warned her repeatedly that she better not get into trouble again or else, Lohan has been spotted hanging around with a formerly estranged friend: None other than socialite star Paris Hilton.

Lohan showed up at a party last weekend at Hilton’s beach house in Malibu, California. Witnesses reported that when Lohan showed up, everyone expected there to be a full-on celebrity fight in the house, but it turns out that Hilton was thrilled that her one-time friend was there.

“Everyone was so surprised when Lindsay walked in and we thought they didn’t get along,” the source said. “But they immediately gave each other a big hug.”

Over the years, Hilton has taken her share of digs at Lohan, famously laughing in the background on a video in which Hilton’s friend Brandon Davis called Lohan a “firecrotch” and acting horrified on her own reality TV show when a homeless woman at a shelter that Hilton was visiting confused the celebutante with the actress.

Other famous folks in attendance at the party included Nicky Hilton, Lukas Haas and Emma Roberts. Attendees said Lohan wasn’t drinking. That’s a good thing, since partying with Paris could put Lohan at risk for getting back into trouble yet again.