The line-up for the 2011 Toronto International Film Festival has been announced and Brad Pitt and George Clooney are leading the way! The actors appear in two of the most anticipated films of the year: Moneyball and The Ides of March. And they won’t be the only stars turning heads at the festival.

George Clooney directs and stars in The Ides of March, where he plays a politician opposite a young press secretary played by the talented Ryan Gosling. On the other hand, Moneyball is a biopic and sports drama that will have Brad Pitt pulling at the heartstrings of every red-blooded, American baseball lover. 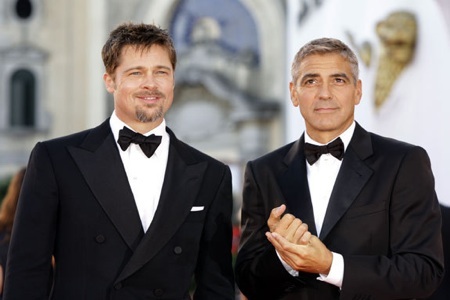 Madonna will also make an appearance at the festival with her romance drama W.E. (yep, she directed it), which stars Abbie Cornish and the singer’s daughter Lourdes Leon, who plays a younger version of Cornish in the film. The story centers on a woman who’s grown frustrated with her marriage and is dealing with the harsh realities of divorce.

Other releases to look out for include the cancer comedy 50/50 with Joseph Gordon-Levitt and Seth Rogen, Alexander Payne’s The Descendants, which also stars George Clooney, and Friends with Kids, directed by Jennifer Westfeldt and starring Megan Fox, Jon Hamm and Kristen Wiig (it’s a Bridesmaids reunion!).

The Toronto International Film Festival will open on September 8 and run for 11 entertainment-filled days. Will you be buying a ticket?