Mariah Carey spent her HSN appearance swatting invisible butterflies, talking about how miserable she was being pregnant and otherwise being Mariah. 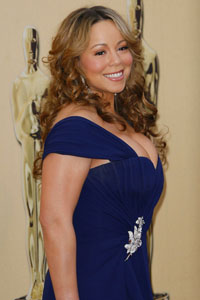 Mariah Carey is an incredibly gifted vocalist and a favorite entertainment personality. Her often kooky, innocently diva behavior is well-known, and dare I say beloved, by fans — and her behavior during her recent HSN appearance is no different.

Mariah spent her time hawking her line of perfume, jewelry, clothes and handbags by complaining about how badly it sucked to be pregnant with twins, complaining about the camera being on her because she didn’t like how she looked, ordering models around and making up words like “camoflaugian.”

Mariah also spent a looooooooong time moaning about how much she hated being pregnant.

“February was bleak for me. I was so uncomfortable,” she said.

“Being pregnant with twins is different than anything. They were always saying to me, ‘Oh, but it’s so worth it,’ and I’m like, ‘Yeah, that’s easy for you to say when you’re not the one whose feet are so big.’ It turned into a really difficult time.”

“Because my body went through so much holding those twins in; you have to keep them in as long as possible because it’s a sacrifice that you make for them, and so literally I was like 47 weeks pregnant.”