Amy Winehouse’s funeral was today and 200 friends and family, including Kelly Osbourne and Reg Traviss, gathered to say goodbye to the talented 27-year-old who died on Saturday in her London home. 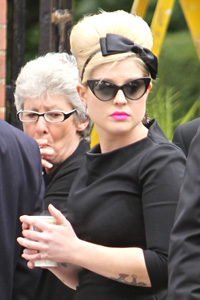 Her boyfriend, Reg Traviss, was at the service, however, her ex-husband, Blake Fielder-Civil, was not at the service and reportedly was told not to attend by Amy’s father who “hates his guts.”

Osbourne paid her respects to her good friend Amy by wearing her hair in the singer’s signature beehive and wore cat-eye sunglasses while holding a white rose in her hand.

The service was conducted by Rabbi Frank Hellmer and was held today because a service must take place as soon as possible after death, according to Jewish law.

The service had prayers and meditation and Amy’s father, Mitch Winehouse (pictured below leaving the service), gave a touching eulogy.

“Mitch was funny, he told some great stories from her childhood. It was a celebration. He stressed many times that she had been more content than she had been in years. Mitch paid tribute to a lot of people from Amy’s life,” spokesman Chris Goodman told the Daily Mail.

“Mitch’s last words to Amy in his eulogy were ‘Goodnight my angel. Sleep tight. Mummy and Daddy love you ever so much,'” said another source of his touching eulogy. 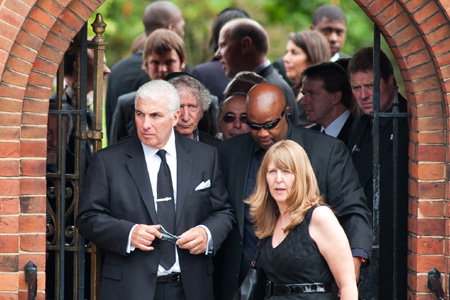 Amy’s favorite song, So Far Away by Carole King, was played during the service as well.

Her body was then cremated at the Golders Green Crematorium in London after the service, however, only very close friends and family members attended this service. “Cremation is part of the family’s tradition,” Goodman said.

An autopsy conducted yesterday was “inconclusive” and toxicology tests won’t be ready for four weeks to determine her cause of death. Winehouse had battled an addiction to drugs and alcohol for many years.