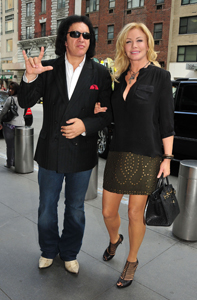 Perpetual bachelor Gene Simmons wants to make an honest woman out of Shannon Tweed. After 28 years and two kids together, the Family Jewels star proposed!

The couple was on a romantic vacation in Belize when Simmons broke out his inner romantic — and of course it was all caught on tape for the A&E cameras.

You guys, he actually got down on one knee and everything! Tweed promptly burst into tears — but you’ll have to tune into the show tonight to find out her answer. Simmons leaked the video of his proposal but brilliantly is making us watch the show to find out what she says.

The KISS frontman hinted at the news to fans on Twitter, writing, “Tomorrow night I put Shannon before everything…”

Earlier this season, 54-year-old Tweed was portrayed as becoming increasingly fed up with 61-year-old Simmons’ womanizing ways. Has the rock star truly changed his tune and become a one-woman man, or is he pandering for ratings? What size family jewel did he put on her finger? Will Tweed say yes?

Tune in Tuesday night to Gene Simmons’ Family Jewels to find out!