Taylor Swift rocked four sold-out shows in Newark, New Jersey this past week after spending some time on voice lockdown.

We recently reported that country cutie Taylor Swift was putting her voice on lockdown due to a nasty case of bronchitis. After canceling numerous shows on her Speak Now tour, Swift was back in action in Newark, New Jersey, like she never missed a beat. 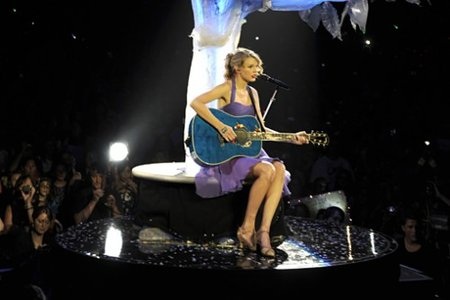 It wasn’t easy for Taylor Swift to cancel shows on her Speak Now tour while she battled bronchitis, but it sounds like it was for the better as she came back strong for four sold-out performances in Newark, New Jersey — the last being this past Sunday (July 24).

Taylor Swift took the stage with her trusty guitar and pretty-girl dress to give the crowd a fantastic show with hits like Mean, Back to December and Love Story taking center stage. She even turned rocker for the night and took on some Bon Jovi with Living on a Prayer.

Swift, excited to be back and doing what she loves, tweeted after her run in New Jersey: “So many beautiful memories from our 4 shows in Newark. Such sparkly, loud crowds!”

Okay, we have to do this. Is anyone else glad Taylor Swift can speak now? Oh, come on, you know you were thinking it. We’re happy the country girl is back and doing her thing. Her next stop on the tour is Grand Rapids, Michigan on Thursday (July 28) with the tour continuing on until November.