Growing up, Jayma Mays’ mother may have been the bigger Smurfs fan. The Glee star’s mom would call her to the TV every time the cute little blue creatures’ adventures appeared. When Mays got the role in The Smurfs opposite the blue benefactors of 60 years of great creations based on the mind of their creator, Peyo, mom was prouder than usual for her talented daughter. 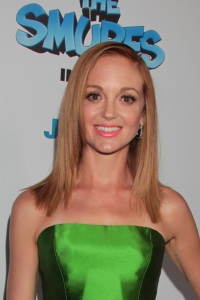 With Glee entering the stratosphere of pop culture fandemonium, Jayma Mays finds herself starring in a film celebrating another cultural icon — The Smurfs. Mays recently visited with SheKnows and extolled the virtues of little blue men (and one woman), Glee’s success and the magical mastery that is Neil Patrick Harris.

SheKnows: When you actually got the call that this job was yours, what was your mother’s reaction?

Jayma Mays: She was thrilled obviously and I was a little worried for the cast to meet her. I’m like, “If she’s crazy already on Smurf love, how will she react [laughs]?” But no, she was really, really excited. I think she was most excited when I told her that Neil Patrick Harris was in it too. She was excited about that.

SheKnows: What was it like working with Neil? Talk about a multi-faceted talent.

Jayma Mays: He is so amazing. I’ve been a fan of his for a really long, long time. That’s no secret now. I seemed a little crazy is some interviews about my love for Neil Patrick Harris. I wasn’t disappointed. First of all he’s the hardest working guy in the business. He’s always doing a million things. He’s on Twitter and, “Oh, I’m directing a play this weekend.” [Laughs] But, he’s always so focused. He’s so genuine and so funny. He’s so good at physical comedy. I would watch him do some of these scenes and with Smurfs all over him. He’s just amazing and lovely to boot. Wow.

SheKnows: What do you think it is with the Smurfs in general that they have resonated with so much love since Peyo’s books from the 1950s?

Jayma Mays: I don’t know. I was actually really surprised about the history of the Smurfs. I just thought it was a Saturday cartoon that kids in America watched. Period. That’s as much as I knew about the Smurfs when I auditioned. So this whole world, especially in the European culture, the book series, I had no idea. First of all, they are really loveable characters. They’re so cute with their different identities and all of that. Maybe subconsciously, there’s a good story behind every episode or every book — there’s something moral about the stories that they have. I think maybe my mom knew that. Maybe she wanted me to watch them. I think that’s nice. You can watch something, especially with kids, you can watch something and they enjoy it and they love it and maybe they’re getting a little message in there too. That’s wonderful. 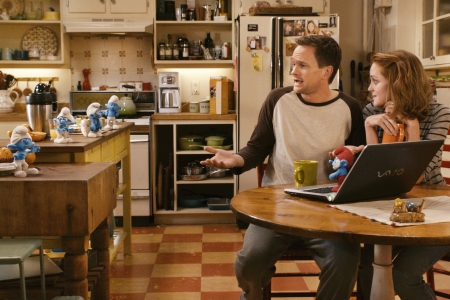 SheKnows: One of my favorite scenes in The Smurfs is at FAO Schwarz. There are a few films that have iconic moments in FAO Schwarz, just for you as an actress, what is it like when you are at an FAO Schwarz filming a movie?
Jayma Mays: I’m so glad you mentioned it. That was a big deal for me! First of all, being an actor working in New York City, that’s what every kid dreams of. If you want to be an actor you think of New York. I was thrilled to bits to be in New York. We also filmed in Central Park and then to have an FAO scene… Big was one of my favorite movies [sighs]. I think it’s everybody’s. We were sitting in there and it was the middle of the night. You can’t shoot during the day. You kind of have that whole store to yourself and you can wander around. It was kind of surreal and really, really exciting. It was almost like I felt like my 12-year-old self was there again imagining Big being filmed there. I felt like it was a really, really big deal.

SheKnows: Who were some of your acting role models coming up?

Jayma Mays: I was always drawn to the funny girl. I like Shelley Long. I like Carol Burnett. I love Goldie Hawn and Lucille Ball — a lot of redheads [laughs]. Because in some way, I guess I can relate [Jayma twirls her gleaming red locks]. Also… I love Harrison Ford, he can do everything. He can do funny. He’s super cool.

SheKnows: And what about Glee? Were you honestly surprised that it became a sensation? 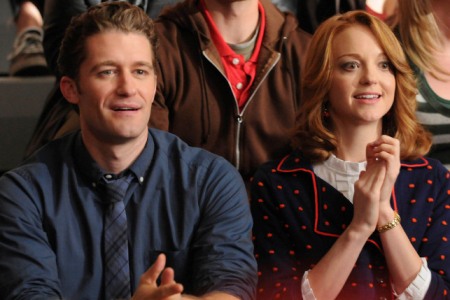 Jayma Mays: I don’t know. Definitely, when I got the script I was like, “This is so special. This is so different and funny and unique. I think this could be something amazing.” But sometimes scripts don’t always turn out or people just don’t get it. Was the idea maybe too strange to convey in a movie or a television show? But I think once we saw the pilot I thought there was something special about the show. But, you just never know. You don’t know how people are going to respond to things. It’s kind of mind-boggling to think about a show that’s that successful. I probably shouldn’t think about it. I’ll jinx it [laughs].

SheKnows: Will we see more singing from you?

Jayma Mays: I hope so. You know I’m not a singer by definition and I get really nervous when I have to do it. But I love the challenge and it feels very challenging for me every time I have to do it. I get a little bit self-conscious. Jane [Lynch] is so good at it. It’s so easy for them to do and that makes me even more nervous. But I love to do it. It’s very fun. But it’s scary when you’re not really a Broadway singer.

SheKnows: It seems like such a close-knit cast. Do you miss them on your summers off?

Jayma Mays: Definitely. I would miss work. The kids are on tour, they’ve just broken from tour. They just have a few weeks off and we’re back on the set. This has been a light summer for me. I feel that this has been the first summer in a long time that I’ve been able to see friends and family, so I’ve really taken advantage of that and it’s important to do that when you can.

SheKnows: The thing about a big movie like The Smurfs is you’re going to be going around the world attending premieres and foreign junkets for weeks. When you’re getting ready to embark on a journey like that, do you get nervous or excited?

Jayma Mays: With The Smurfs, we were being honest and true to Peyo’s creation. I get excited for this stuff. It’s fun. It’s something that we should enjoy. It’s such a blessing to do in this position. I try and enjoy every minute of it.