Nicole “Snooki” Polizzi is penning her latest tome, loosely based on her life at the Jersey Shore, titled Gorilla Beach. Her latest work of fiction should hit bookshelves in May of 2012 and will again revolve around the lives of characters Bella and Gia, two girls looking for the summer of their lives at the Jersey Shore. 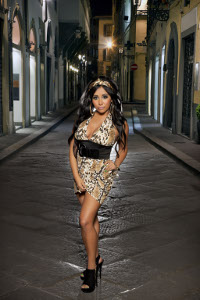 Everyone’s favorite guidette, Nicole “Snooki” Polizzi, will be taking the writing world by storm once again when she releases Gorilla Beach, just in time for your summer reading list of 2012.

Snooki follows up her unbelievable success of A Shore Thing with her latest work of fiction. A Shore Thing landed on the New York Times bestseller list and reached a high of number 24.

Her new book continues to follow the lives of two cousins, Gia and Bella, who plan to have the “sexiest summer of their lives” at the Jersey Shore.

For those who are not up on the latest Jersey Shore slang, gorillas are guys who are, well, let Snooki tell you. “A gorilla is like a really big, muscley guy, pretty much like a guido juicehead.” Translated, that means the type of young men you see at a gym, working out to obtain large muscles, tattooed, tan and wearing tight shirts.

Her publisher, Simon and Schuster, also revealed that Polizzi will be penning an autobiography titled Confessions of a Guidette and it is scheduled to be released in November of 2011.

Snooki’s first book, A Shore Thing, followed guidettes Giovanna “Gia” Spumanti and Isabella “Bella” Rizzoli as they partied their way through Seaside Heights. They make friends, meet different guys and fall in and out of love and trouble.

Basically, if you’ve ever watched an episode of Jersey Shore, this is the literary version.

Polizzi has made quite a name for herself in her short time in the spotlight. She has worked her celebrity for its 15 minutes of fame, and then some, by appearing in music videos, partaking in celebrity wrestling and basically making one poor choice after another.

Her most infamous moment came during Jersey Shore’s season three, where her alcohol addiction spiraled out of control. She was arrested on the beach in Seaside Heights and charged with disorderly conduct. She pleaded guilty to the charge, received two days of community service and was fined $533. Snooki was recently arrested in Italy for running her vehicle into a police car.