Amanda Tapping is one of the most beloved scifi stars in recent memory. Not only did she star on Stargate SG-1 and Stargate: Atlantis on Syfy, she successfully managed to take Sanctuary from a web series to a Syfy show in its fourth season! In her spare time, she runs an amazing not-for-profit organization to help children in need. Not sure when she has time to sleep! I got to catch up with Tapping at last week’s San Diego Comic-Con where we chatted about what’s coming up in the new season. Check out our interviews below and the link to Sanctuary for Kids.

In the hit Syfy channel show Sanctuary, Amanda Tapping plays Dr. Helen Magnus, an extraordinary woman who’s been around a lot longer than you’d think. She’s using her extended life span to help extraordinarily-powered creatures and people called Abnormals. The show started as a web series and is now shooting its fourth season. 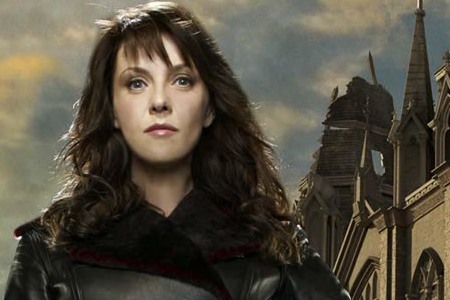 I’ve been a fan of this show since the beginning. If you haven’t checked it out yet, you must! It’s unusual for so many reasons and I promise you, you’ll be hooked! I caught up with Tapping at Comic-Con where she told us how it feels to see her passion project take off, surviving and thriving after a change in timeslots and what’s in store for season four.

Tapping, along with Sanctuary members Damian Kindler and Jill Bodie, founded a not-for-profit organization called Sanctuary for Kids. Here’s what they do:

”The mission of Sanctuary for Kids is to improve the lives of children around the world who need protection and are in crisis — those who are exploited, dispossessed and threatened.”

Check out our video interview below and stop by the Sanctuary for Kids website to see what they’re all about.