Hayley Atwell really enjoyed acting alongside Chris Evans in Captain America: The First Avenger. In fact, she couldn’t stop herself from groping his impressive man boobs!

Hayley Atwell enjoyed the 1940s style, the guns — and the impressive muscles of her co-star, Chris Evans, in their movie Captain America: The First Avenger. Atwell, who plays Peggy Carter in the action flick, told SheKnows all about the scene in which Evans takes off his shirt revealing his impressive muscles. 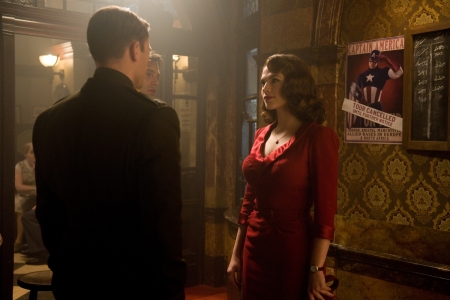 “I hadn’t seen him with his top off until that moment. I was like, ‘Go for the man-boob.’ [Director] Joe loved it, his note was, ‘Do it again,'” Atwell says. “So we did lots of takes just to see how far we could go.”

So, she got to do take after take of her caressing Chris Evans? We don’t feel sorry for her at all!

“Then it got a little bit over the top,” she explains. “There was a little touch of the nipple, but then it became like a Saturday Night Live sketch. It felt like Austin Powers, really corny. But I like that they kept it in because Peggy’s a repressed character, a little uptight, and she’s trying to do the right thing.”

Speaking of Evans’ impressive muscles, he said that the training for the movie “sucked” and it included two hours a day of intensive exercise.

“Working out sucked, eating sucked more. You get to a point where you just can’t even look at another piece of chicken,” he said.

It may have sucked for him, but all that training paid off for us — and for Atwell!

Check out the entire SheKnows interview with Hayley Atwell here>>>