The Smurfs star Neil Patrick Harris is a busy man. Besides anchoring the ensemble comedy hit How I Met Your Mother, Harris has a busy stage and screen career — not to mention his being a go-to host for award shows such as his recent successful hosting duties of the Tony Awards.

In The Smurfs, Neil Patrick Harris portrays a husband to Jayma Mays, and his character is more than a little nervous about becoming a first time father. This is certainly a case of art imitating life as Harris recently welcomed twins with his longtime partner, David Burtka. 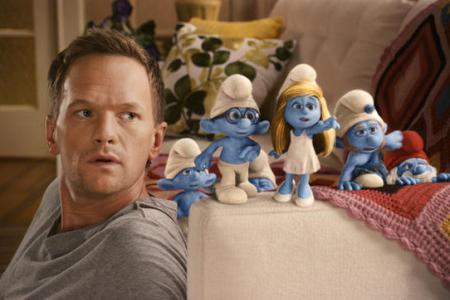 Harris was all too eager to take the role not just because he is a Smurfs fan, but also because he relished the opportunity to work with the technological side of moviemaking as The Smurfs is a 3D live action adventure with animated Smurfs appearing alongside the human actors.

In The Smurfs, a handful of our favorite blue creatures find themselves in New York City and need Harris and Mays’ help returning to their fully animated village with the evil Gargamel (Hank Azaria) hot on their trail.

SheKnows: What was it about The Smurfs other than its iconic nature that you wanted to be a part of the new film?

Neil Patrick Harris: I’m a techno fan and I love the technology of making films and so I thought, “Oh, how intriguing and super fun.” But, more importantly, how it would be crazy fun to act in a movie where you’re acting alongside images that won’t be created in a year and the technical elements of how that happens. So it was technology straightaway for me with a real secondary — to make sure the script is logical enough to not just be a kids’ movie but smart enough that people who are fans of mine or Hank’s or Jayma’s will still get a kick out of it.

SheKnows: How much of a joy was it working with the amazing Jayma Mays?

Neil Patrick Harris: I’m a true Jayma Mays fan. It’s kind of annoying. Her husband should be a little jealous.

Neil Patrick Harris: I think that she’s so sweet and earnest and simple, yet quick and funny. She’s great especially for a movie like this. Like Glee is perfect [for her]. She is able to do that so well and every scene with her was a little off but always on point and the same with The Smurfs, to have a girl, a mom, a pregnant mom, sitting and talking to a Smurfette, talking about what it means to be a woman. In the wrong hands, I think it could really be on the nose and she’s just a little bit off and I think that keeps it interesting.

SheKnows: What do you think it is about the Smurfs that they resonate for audiences since the 1950s? 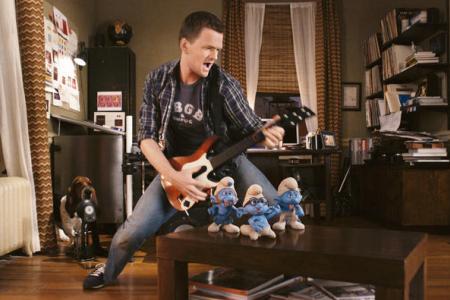 Neil Patrick Harris: I think Mr. Peyo just found something that makes perfect sense in a story structure. For kids, a primary color that’s very simple to notice with everyone having their unique personality. So on a simple level for children it makes perfect sense but then on a bigger level, it’s a big family.

SheKnows: Obviously you got into acting at an early age. What was it about the act of acting that first compelled you? Was it anything specific?

Neil Patrick Harris: I grew up in a very little town in New Mexico. It was just very football-centric and very small and there wasn’t a lot of arts to be had, so there weren’t very many options. So what options there were I wanted to know more about. So when I was an elementary school student and the high school was putting on a version of a musical in the gymnasium, that seemed so unlike anything else, I had to be a part of it. So I found out there was a little theatre that worked out of the country club twice a year. I was asking how I can be a part of that. So I think maybe I was intrigued by exclusion. It wasn’t like there was a department. There weren’t a lot of options and so I certainly wasn’t a football guy — you’ve seen my pictures. So I just sort of went that way. My parents were in the church choir and I got to do that. There was a band. Band was always a big deal. I’ve just always been kind of drawn to it.

SheKnows: I’m also really fascinated by your stage work and there’s something so immediate and powerful about that. For you as an actor, is that something you go back to, to kind of recharge?

Neil Patrick Harris: I feel like stage actors are athletes way more than TV and film actors are. Well certainly more than film actors are. TV has become a big factory and I’m not saying that disparagingly. It’s just that we go to work Monday at 6 a.m. and we haul out at 8 p.m. and the next morning it’s 8 a.m. They get their turnarounds, they’re out at 10. By the time it’s Friday, they’re working at four o’clock in the afternoon and they’re done. In theatre you have to do the same thing over and over but you have to have great application with great passion because everyone that’s seeing it, most haven’t ever seen it before. Especially in musical theatre, you have to be singing and dancing and you have to be very fit and seem very virile all the time — every time. When you look at actors, they’re just always good and they’re always on and they’re always bigger than life in a way. That’s really hard to do. I mean I’ve done a few. I did Cabaret for seven months and got bone fractures in all my toes from stomping around so much [laughs]. I mean really, it’s exhausting. You can’t really talk in the day because you have to save your voice for the night. You can’t go to bars and shout. You can’t drink much. You have to be very, very disciplined and yet since it’s live, it’s immediate. If you’re doing something that’s working, it’s like an opiate. You can feel 900 people all keyed in on what you’re doing and like not breathing or breathing together because something’s about to happen or just happened and that’s a rare thing that you don’t get on film. 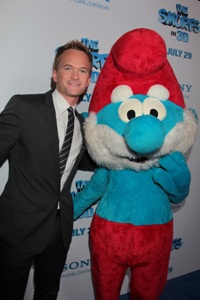 SheKnows: Was it an easy decision for you to host the Tonys because for many Americans that’s the one night a year they get to see Broadway unless they go to New York?

Neil Patrick Harris: I crow about seeing things live all the time so I’m a good bandleader or ringmaster for that. Whether it’s a Broadway show or whatever, I’m a big proponent of it. But at the time, to me, you have to be careful of the year because some years the shows aren’t as great, which I don’t think is great for Middle America. But this last year was a great season. I just thought The Book of Mormon was awesome. In any other year, if The Book of Mormon wasn’t what it was, it still would have been a real interesting race as to who would win Best Musical because they were all very good. So that made it even more of an enjoyable evening.

SheKnows: When you do a gig like that, and then the next day some of the stuff you did is a viral sensation on YouTube…

SheKnows: Does that just blow your mind?

Neil Patrick Harris: Yeah, I loved it. I also liked most of the comments on YouTube. It was 99 percent thumbs up.

Neil Patrick Harris: Mother may I?

SheKnows: I wanted to ask about How I Met Your Mother and the talented cast that you have there — so many people doing so many things. Jason Segel is writing movies and bringing back The Muppets, Josh Radnor’s writing and directing movies… When you guys first came together, did you have any idea that it would be what it was and has it proved to be inspiring for you? 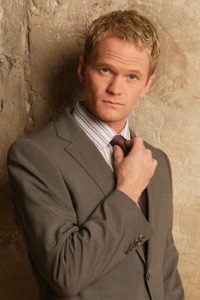 Neil Patrick Harris: The cast constantly inspires me with how much they all continue to raise their own game — especially off season. It’s almost hilarious. We’ve been doing the show long enough that when we’re doing our day job we’re all exhausted from having worked so hard in our off season. Usually it’s the other way around. You relax during the hiatus [laughs]. It’s great. We’ve all grown up together and we were adults when we started so it’s just really special to see Alyson (Hannigan) blossom into such a fantastic mom and to own herself in a way that I have never seen before. To watch Cobie (Smulders), who I’m just a wild fan of — she’s so talented and now she’s finally doing something like The Avengers. I can’t wait to see where that takes her. And she’s a fantastic mom too. Then Jason’s got so many irons in the fire and they’re all fun things that he likes and loves like The Muppets. I always live vicariously through Jason. And Josh, he follows his own path. He spends a lot of time travelling and he wrote a book that I think will be eye-opening to his experiences. He’s directing his second film too. I think as a group we’ve had a lot of smart decision-making in our lives and not a lot of recklessness. I just wish that more people appreciated the hybrid writing of the show. It’s lumped into various things and overshadowed by dance competitions, so it bums me out a little when in season six there’s a new list of shows that everyone’s crowing about. I wish we’d have a resurgence.