The Chilean miners’ movie is finally happening. The story of the 33 men who were trapped in the San Jose mine last year is heading to the big screen. Hollywood just can’t ignore a tale filled with angst and struggle without adding some movie magic!

Shortly after the Chilean miners were rescued, there were rumors that their plight would be adapted into a feature film. At the time, it was all speculation and nothing solid developed but now it’s official. Film producer Mike Medavoy and his production company Phoenix Pictures have cut a deal. 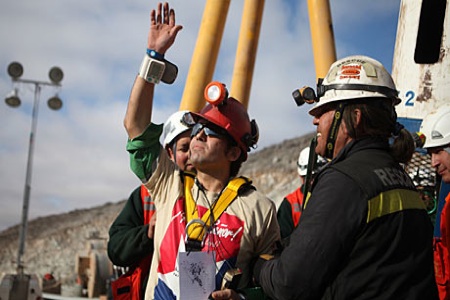 Medavoy, who previously produced Black Swan, has signed a contract with the miners to once again, bring their story to the masses. The screenplay for the film will be written by Jose Rivera, who’s best known for his work on The Motorcycle Diaries.

“Like millions of people around the world, I was completely engrossed watching the rescue at Copiapo,” said Medavoy. “At its heart, this is a story about the triumph of the human spirit and a testament to the courage and perseverance of the Chilean people. I can’t think of a better story than this one to bring to the screen.”

Medavoy lived in Chile for years and feels that he can definitely relate to the pride and effort of the people. And in case you forgot, the minors were trapped underground for 69 days. It wasn’t a pretty sight and it caught the attention of viewers across the globe.