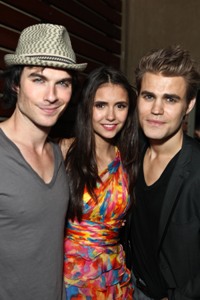 Though they’re still trying to keep fans in the dark about their off-screen romance, Vampire Diaries stars Nina Dobrev and Ian Somerhalder were undeniably a duo at this year’s Comic-Con International.

“Nina and Ian are so obviously together,” an eyewitness at the Maxim/FX Party Friday night tells SheKnows.

“They were by each other’s side the whole night and very touchy feely.”

It appeared it was a boys’ night out for the co-stars as Skarsgard’s girlfriend Kate Bosworth was nowhere in sight. 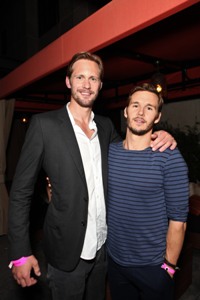 “Alex and Ryan came at the very end and were almost trampled by the crowd,” says our eyewitness.

“They were both taking photos with fans and hamming it up. They arrived just in time for last call and ordered a round of shots.”