Mike Tyson went to Michigan to become a male nurse. No, really.

Champion boxer Mike Tyson is enjoying a bit of a career resurgence, thanks to appearances in The Hangover films and his A&E reality show, Taking on Tyson. Now, Tyson is taking on a new sort of reality: He’s becoming a male nurse. 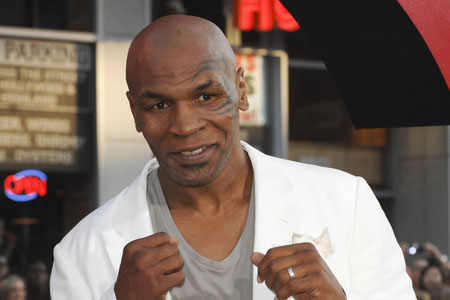 Well, kind of. Tyson is taking part in the new reality show, Same Name, that shows celebrities trading jobs with people that have the same name. For his episode, Tyson travels to Michigan to live a day in the life of another Mike Tyson, a nurse.

“It was a great time,” Tyson wrote on his Facebook page of his experience. “Spent time with an awesome guy yesterday that shares my name.”

The show debuted Sunday night with actor David Hasselhoff trading places with another Hoff, a father and entrepreneur.

We don’t know what we’re more surprised about: That Tyson cared for sick people, or that there’s another person with the unfortunate name of David Hasselhoff.

Not enough Tyson for you? You’re in luck — the boxer is reportedly being considered for a spot on the upcoming season of Dancing With the Stars. That’s right: Tyson can punch, but can he two-step? We can’t wait to find out.

Will you tune in to see Mike Tyson as a nurse on Same Name?