Sean Kingston made his first live performance with Nick Minaj after his near-fatal jet ski accident. Watch his performance here! 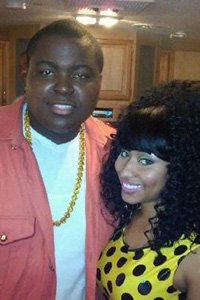 Two months after a near fatal jet ski accident left Sean Kingston hospitalized with water in his lungs, plus a broken jaw and wrist, the performer made a surprise performance on Friday with Nicki Minaj in Palm Beach.

He appears to have fully recovered from the accident, as the 27-year-old looked like his normal self as he sang a duet of Letting Go (Dutty Love) with Minaj.

“Just killed it on stage with the lovely [Nicki Minaj],” Kingston tweeted after the show. “Had an amazing time feels great to be back on stage [especially with] the hottest female out.”

Kingston crashed his jet ski in Miami over Memorial Day weekend and was initially listed in “critical but stable condition.” The singer was released from the hospital on June 23rd.

The passenger on his jet ski, Cassandra Sanchez, suffered some minor injuries but said she won’t be pressing charges.

“I know this whole thing was just an accident,” Sanchez said. “I won’t be pressing any type of charges or hiring a lawyer. Sean is a good guy.”