The cast of The Amazing Spider-Man swung into San Diego last week to attend its annual Comic-Con celebration. Fans anxiously waited for their first look at the new Peter Parker and his alter ego Andrew Garfield. The unsuspecting group had no idea that a superhero surprise was waiting for them.

Andrew Garfield appeared at his first San Diego Comic-Con dressed in full costume. The British actor, best known for his acclaimed role in The Social Network, appeared in front of an audience of thousands disguised as, you guessed it, Spider-Man! 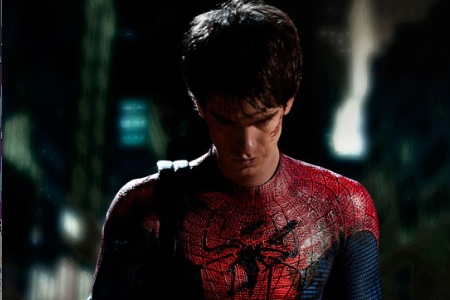 Garfield posed as an ecstatic fan from the audience but quickly revealed his true identity to a roaring crowd. He read a heartfelt letter about how important Spider-Man is to him and how the superhero saved his life. He then went on to introduce his co-stars and the director.

Several exclusive clips from The Amazing Spider-Man were shown to the lucky audience and from what we’ve heard, it was the best panel at the convention. It sounds like Andrew Garfield has won over some of the naysayers who doubted his casting.

The Amazing Spider-Man co-stars Emma Stone and Rhys Ifans (both of whom participated in the panel) and is directed by Marc Webb. The film is scheduled to hit theaters on July 3, 2012.

Check out the surprise Comic-Con video below!