Kristen Stewart and Charlize Theron will star in an updated version of Snow White together — but are the two stars already feuding?

The cast of one of two Snow White flicks coming out next year got together at Comic-Con, and it seems that the egos of at least two of them are already rearing their pretty little heads. 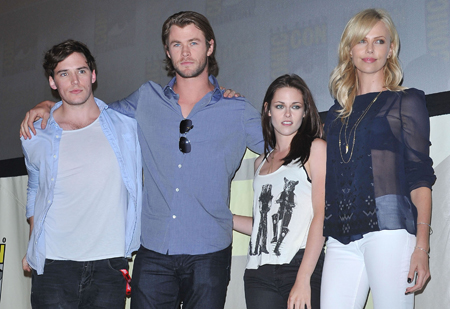 Kristen Stewart, who will play Snow White in Snow White and the Huntsman, and Charlize Theron, who will take on the role of the Evil Queen, sparred at the Comic-Con panel while discussing the film, and while it was done with smiles and in a jokey manner we can’t help but wonder if the ribbing will turn into a real cat fight on set.

It started out innocently enough, with Stewart talking about how physically strenuous the role will be.

“I’m not good at stunts, actually,” said the Twilight star. “I don’t know why I’m doing this… But you better not mess with me because I take myself very seriously.”

“You’re going to be fine,” Charlize Theron assured her. Nice enough, right? Then she had to add this in: “I’m an Oscar winner, so we take work really seriously here. You’ll be fine.”

I’m an Oscar winner and you’re not, nyah nyah!

Stewart seemed a little taken aback. “You don’t have to show me up,” she said.

“I will call you Snow White all the time,” Theron replied.

Chris Hemsworth butted in, perhaps to diffuse the situation, saying, “I’ll be calling Sam Snow White.” The actor, who will play the huntsman who helps Snow White escape, was referring to Prince Charming Sam Claflin.

Hmmm. Unfortunately we all know how catty women can be towards each other. Do you think there was a grain of seriousness in the banter between Kristen Stewart and Charlize Theron? Will these two feud on set or keep it professional?

read on for more kristen stewart