Justin Bieber delighted fans when he made a surprise appearance at Selena Gomez’s concert in Costa Mesa, California. Watch the video and see fans go crazy at seeing Justin and Selena together! 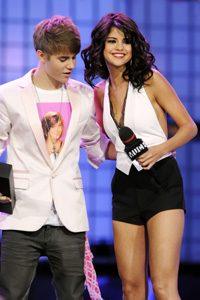 Selena Gomez spent her entire birthday weekend with Justin Bieber — and the fun continued when he made a surprise appearance at her July 24th concert in Costa Mesa, California.

Fans went crazy when Bieber, wearing a bright yellow shirt, walked on stage and gave Gomez a huge hug. He then treated his screaming fans to some songs, including Favorite Girl and a cover of Justin Timberlake’s song, Cry Me a River.

“Had a great night and surprised the people,” he tweeted. “Felt good to be on stage. Nothing is changing that.”

He then sent his girlfriend her own message, tweeting: “U did great tonight. Proud of u.”

Bieber, 17, treated Gomez to a fun-filled birthday weekend. The Monte Carlo star, who just turned 19, spent the weekend at Disneyland with Bieber, followed by a romantic dinner at Geisha House.

“They seemed really happy and totally in love. While they were eating dinner, Justin fed her a Hollywood sushi roll, which is a roll with crab, avocado and tempura cucumber,” an onlooker tells MTV. “For dessert, they shared tempura green tea ice cream. It had three candles in it, and everyone sang ‘Happy Birthday’ to Selena, including Justin. Right before she blew out the candles, Justin said, ‘Make a wish!’ and she smiled. After she blew out the candles, Justin leaned over and kissed her on the lips.”