Denise Richards threw herself a baby shower to celebrate the adoption of her new baby! 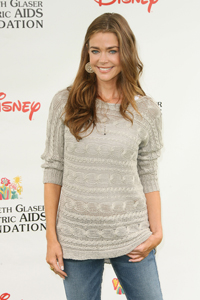 It may not be traditional, but it was lovely all the same. Denise Richards threw herself a baby shower at the Montage Hotel in Beverly Hills to celebrate the adoption of her newest daughter, Eloise Joni, who joins her two older daughters by ex-husband Charlie Sheen.

Denise tweeted her excitement before the party started. “So excited for Eloise’s shower today. Gonna be amazing!”

Party planner to the stars Mindy Weiss put the day together, which included a cake with a top fashioned after baby Eloise and her big sisters Sam and Lola.

Denise’s close friends and family joined her at Eloise’s welcome party, including a pregnant Tori Spelling, The Biggest Loser host and Days of Our Lives star Alison Sweeney and actress Ali Landry. Her BFF Brooke Burke was out of the country on vacation with her own family and missed the festivities.

Richards adopted the baby in June.

read on for more denise richards