Comic-Con is the best place to get top secret information on your favorite show’s premiere — including The Vampire Diaries. The cast of the hot CW show dished a few secrets about season three during the show’s panel and while not all was revealed, we’re now completely on edge. 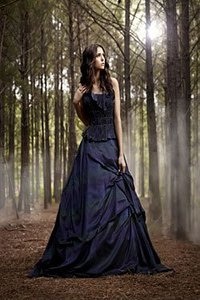 If you’re like us, you’ve been on pins and needles waiting for the September 15 premiere of The Vampire Diaries. The cast and creators have been quiet about most details, aside from season three being dubbed as the year of the Originals and the dark path Stefan’s (Paul Wesley) about to explore.

If you just can’t wait and need a little more to keep you going until September 15, The Vampire Diaries dropped by Comic-Con and revealed a few teasers we thought you’d be interested in sinking your vamp teeth into.

For example, for those of you on Team Damon (Ian Somerhalder) and Team Elena (Nina Dobrev), don’t get too excited just yet. It looks like our favorite will-they-or-won’t-they duo might be too preoccupied with finding Stefan to explore that kiss from last season. Hey, we just deliver the scoop.

As for Klaus, before it gets better it will get worse. Joseph Morgan (Klaus) revealed there will be mayhem where Klaus and Stefan are concerned — and by mayhem we mean we’re sure to see Stefan go dark rather than see him come to the light right away.

Okay all you Caroline (Candice Accola) and Tyler (Michael Trevino) fans, this isn’t much but it’s something. Accola said this of season three: “They do have a scene together in the season premiere.” Will they profess their undying love for each other? Will a vamp and wolf find love?

Another nice little nugget of info executive producer Julie Plec offered up was this about Jeremy (Steven R. McQueen) and his ghostly vision of his ex girlfriends: “This is not just a supernatural consequence. It’s an emotional consequence. Not only are we going to be able to tell a cool and creepy ghost story, but a tough emotional story as well.”

She was also very clear about making sure fans understood that Elijah (Daniel Gilles) would return. We’re not sure how, but be on the lookout for that.

Last but surely not least, TVD has nabbed former Heroes star Jack Coleman for a story that will give him strong opinions on vampires.