Like many celebrities, Amy Winehouse’s ex-husband, Blake Fielder-Civil, tweeted his sadness over his former wife’s death on Saturday. 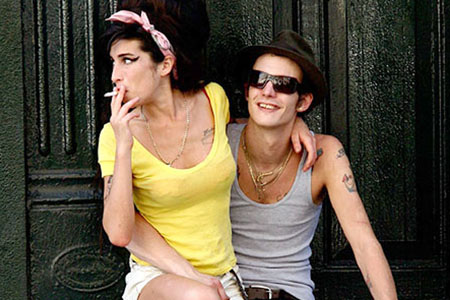 The pair were a dangerous duo: They fought and did drugs together — so many that Fielder-Civil once thought Winehouse died in his arms.

Amy Winehouse victim of the 27 curse? Other stars who died at 27 >>

“I knelt over her as she kept on fitting. But then suddenly she just passed out and stopped breathing. It was the most frightening thing I had ever seen. I felt sure I was watching her die right in front of me. I didn’t know what to do or how to save her. I held her to me — and I thought she was dying in my arms. But somehow I managed to open her mouth and breathe air down her throat,” Fielder-Civil told The Sun in 2009.

The couple eventually divorced — and Fielder-Civil is now engaged to Sarah Aspin. However, Winehouse had been harassing her ex-husband in recent weeks.

“She needs to keep her hands off him. He is mine and we are a family now… I’ve had enough of her thinking she can click her fingers and get him back whenever she wants,” The Sun quoted Aspin as saying. “She phones him when she is really out of it and her texts are even signed off ‘your wife.'”