According to several reports Amy Winehouse was found dead Saturday afternoon in her London apartment. She was 27 years old. 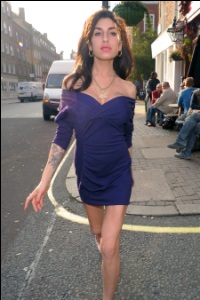 News that Amy Winehouse was found dead Saturday afternoon has yet to be officially confirmed, though numerous outlets are reporting the loss of the young Rehab singer.

The troubled life and death of Amy Winehouse >>

Sources have told the Sunday Mirror that an overdose of drink and drugs is the suspected cause of Amy Winehouse’s death.

SheKnows spoke with Metropolitan police who are not naming Amy Winehouse as one of the dead, but have issued the following press release in regards to an unexplained death Saturday afternoon:

“Police were called by London Ambulance Service to an address in Camden Square NW1 shortly before 16.05hrs today, Saturday 23 July, following reports of a woman found deceased. On arrival, officers found the body of a 27-year-old female who was pronounced dead at the scene. Enquiries continue into the circumstances of the death. At this early stage it is being treated as unexplained.”

Amy Winehouse victim of the 27 curse? Other stars who died at 27 >>

Amy Winehouse canceled her European tour after an embarrassing performance in Serbia last month to continue to work on her long struggle with sobriety. A message on her website to fans reads, “Amy Winehouse is withdrawing from all scheduled performances. Everyone involved wishes to do everything they can to help her return to her best and she will be given as long as it takes for this to happen.”

Amy Winehouse visited rehab for treatment most recently in May of this year, but friends of the singer openly worried for her. “Her drinking is totally out of control. Amy is constantly out of control on vodka,” they said. “She is rattling about at home in north London drinking herself into oblivion. Three times this week she has been so drunk she passed out.”

Our thoughts go out to family and friends of the singer in wake of the news that Amy Winehouse is dead.