Weston Cage has checked into rehab after two domestic violence arrests in less than a month. 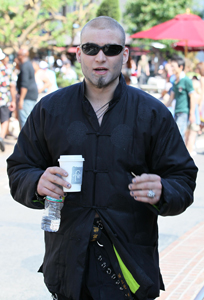 Here’s what the past couple of months have held for the son of Nicolas Cage: He was put under psychiatric hold after trying to roundhouse kick his trainer in a cafe, both he and his new wife Nikki Williams were cuffed for domestic violence at the beginning of the month, and he was taken in again on domestic violence charges earlier this week.

Did we mention Nikki Williams is pregnant?

It’s no shocker that alcohol and/or drugs may have played a part in the chaos.

“Many fine opportunities await such a talented young man, including negotiations with a major production company utilizing his exceptional martial arts and acting skills,” said Jerry Digney. “Weston is getting the help and support that he needs during this time. We are all hoping that he will be able to do it respectfully, in peace.”

Before checking in, Weston Cage addressed his relationship with his wife, both of their burgeoning music careers and just more weirdness in general.

“I would like to congratulate my multi-talented wife on her recent recording contract. I have always been supportive of her music. In no way would I ever be jealous of her successes, as I do not follow her preferred musical genre, and am personally working on a new solo album that I should have recorded a long time ago,” he said.

“I am getting myself together, so I’m sorry about being mislabeled by people who don’t know me, or realize that I come from a long line of creative and successful artists.”