Nebraska Lady Gaga fans are wondering if Mother Monster is moving to the Cornhusker State. Is it true? 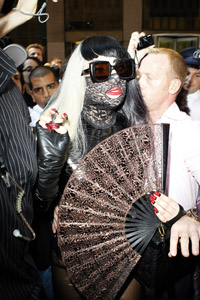 Lady Gaga told Howard Stern earlier this week that she still lives in a tiny apartment in Brooklyn, but is she building a house in Nebraska? That’s the rumor going around Omaha, the state’s largest city and hometown of her on and off boyfriend, Luc Carl.

The 8,000-square-foot house is currently under construction on the outskirts of the city and features a 12-car garage, according to the Omaha World Herald. Fans have been driving around the property for months to take pictures, according to builder Dick Lind.

The only problem? It’s apparently not for the Born This Way singer. Though, would they admit it if it was for Mother Monster? Probably not, though tons of celebs have multiple homes around the world.

“It’s been a real nuisance for a couple months,” Lind said. “The homeowners are getting pretty frustrated. They’re worried about the liability situation.”

Why in the world would Mother Monster build a house in suburban Nebraska? The rumor started right after Christmas 2010 when Gaga spent the holidays with Carl’s family in Springfield, Nebraska — population 1,600. Gaga was spotted all around the area during her visit, including at a seafood market, a bowling alley and an Omaha gay club. 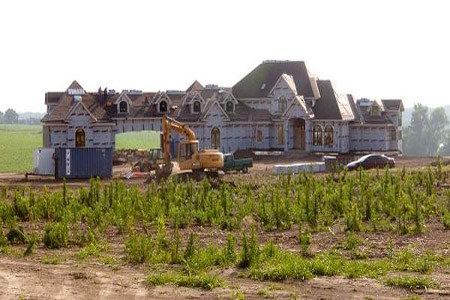 The rumor reignited Wednesday when Gaga touched down in Nebraska to film a new music video. She was spotted in a rural area near Omaha sporting a black dress in the state’s 103-degree heat. She’s reportedly filming the video for her next single, You & I, that talks about her relationship with her “cool Nebraska guy.”

Gaga’s continued ties to Nebraska is exciting news to fans — even if not all Nebraskans are excited about it.

Can you envision Lady Gaga living in Nebraska?