The new action film starring Ryan Gosling and Carey Mulligan — Drive — debuted at Comic-Con. Is it worth the wait? 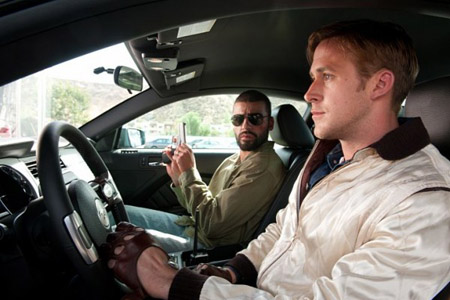 Drive stars Gosling as a “quiet, unassuming, young Los Angeleno — Hollywood stuntman by day, getaway driver by night — who falls for the young mother (Mulligan) who lives next door. Only problem is, her husband’s fresh out of jail, and he needs help with one last job.”

Sounds like there’s going to be a lot of steamy action both inside and outside of the bedroom.

Mulligan and co-stars Ron Perlman and Albert Brooks — along with director Nicolas Winding Refn — were at Comic-Con on Thursday to talk about the film and debut a few scenes.

Sounds interesting! We’re more excited to see Gosling in a hot action flick, but it’s a bonus if the movie is interesting, too.

Which movie are you more excited to see: Crazy, Stupid, Love or Drive?