Ricky Martin’s baby dreams came true with the birth of twins Matteo and Valentino in 2008, but another baby may still be in the future for the singer.

Ricky Martin is opening up about love and baby plans. The singer, who came out in March of last year, is now happily (and publicly) in love with a man named Carlos and enjoying his role as father to his nearly three-year-old twins. In a new interview, Ricky Martin talks about the possibility of both a wedding and more babies. 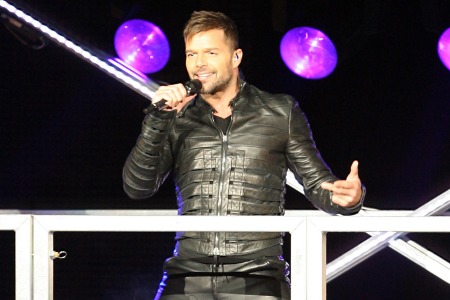 On becoming a father Ricky Martin says, “I decided I wanted children long before I met Carlos. When he came along, he wasn’t part of the plan!” Speaking of the man in his life Ricky continues, “The way he is with the children is magical. It was very important to me that they all got along. They come first in everything.”

For now Ricky Martin and Carlos are holding off on plans to walk down the aisle. “We’re really happy where we are right now,” the 39-year-old says on the topic of marriage. “But maybe in the future.”

Up next for Ricky is a role in Broadway’s revival of Evita. The singer, seen here in May on his Musica + Alma + Sexo tour, is looking forward to staying in one spot for a while. He says, “I love acting and it will be great to have a regular routine in one place for a while with the boys.”

Will the boys have a little brother or sister some day? Ricky Martin explains, “Definitely not right now — I’m finally diaper-free, which is a relief. But I would like a little girl.”