Dog the Bounty Hunter is being criticized by a Colorado sheriff who says he didn’t follow proper procedure when dropping off a fugitive. 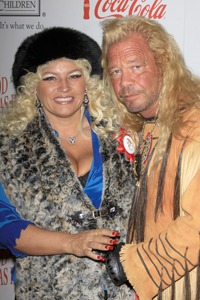 Mesa County, Colorado Sheriff Stan Hilkey says Dog the Bounty Hunter — aka Duane Chapman — put his entire staff in danger for failing to follow proper procedure when he dropped off a fugitive who had been pepper sprayed.

Hilkey says the accused was an “injured, contaminated mess” when brought to the station and that Dog and his wife Beth Chapman gave his staff a hard time for giving the man medical attention before booking him, as required by law.

“What happened inside the [sheriff department] lobby though is what is most troubling to me. While Dog stayed outside, shirtless and sweaty, prancing back and forth waving his golden locks for the camera, his team brought this freshly pepper-sprayed fellow into the enclosed space of the Sheriff’s Office lobby with other citizens present. They also brought him in injured,” Hilkey wrote on his blog.

“So without any regard for contaminating the other citizens in the lobby of the sheriffs’ office, or the employees of the sheriff’s office, they just march this injured, contaminated mess in and expect us to jump and ask for an autograph??? Sorry, but staff did what they would do with anyone, including police officers, who bring someone to jail injured and chemically contaminated.”

Hilkey says Beth “attempted to lay a big ol’ guilt trip on our staff about ‘releasing’ their catch and educating us about what our judges would think of us.”

Although Dog’s people hosed the fugitive down and changed his shirt in an attempt to decontaminate him, Dog’s crew still had the chemical all over them when they came inside, a Mesa County Sheriff’s Office spokesperson said.

“Dog brought someone in… not knowing the standards of bringing someone in who has some medical wounds,” said Heather Benjamin. “There was multiple people who had pepper spray on them and with our ventilation system we had multiple people affected.”

“We’re not gonna debate Dog. We want to talk about hard-working county employees who continue to not get public recognition.”

A source says Dog was blindsided by Hilkey’s comments because he thought they parted on good terms — but neither he nor A&E have any official comment on the matter so far.